This anti-Blackberry tirade was written late one night in May 2008 as I waited for a much-delayed flight back from Germany to the UK. Looking back at the piece now, all I can say is that I must have been in a really bad mood when I wrote it!

It's Time to Ban the Blackberry 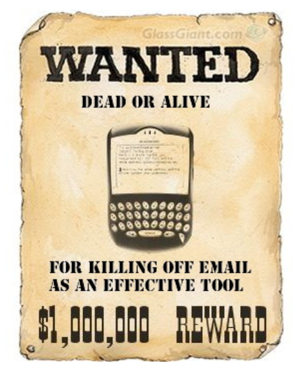 It's late on Tuesday evening and I'm stuck in a German airport, awaiting my return flight to the UK. All around me are business types, all twiddling away intently on their Blackberry devices.
​
While many have found the Blackberry to be a godsend, an efficient tool for staying connected to the office when out and about, my personal opinion is rather different. It's my firm belief that the devices developed by Canadian firm Research in Motion (RIM) have ruined email as an effective means of communication.

There are many things about the Blackberry that have made it a disaster for emails:
It's time to push back on the growing belief within business that the only way to advance your career is to sign up to carry one of these infernal devices. We need senior leadership to be making better decisions, not simply instant ones. The "Sent using Blackberry" signature tag shouldn't be regarded as a status symbol but instead as a cry for help, an indication that the individual in question needs help getting their life back in balance.

The Blackberry has reduced the value of email to little more than Instant Messaging. Email belongs on a full-size computer, not crammed on to a handheld device. Let's use Instant Messaging for small devices and reserve email for when we have access to proper computers.