I wrote this review of Writely, a browser-based web application, in the first few days of March 2006. I came away very impressed. At the time it represented the very cutting-edge of what was possible in a web application.

Writely - the next generation of word processor?

Recently I've been playing around with a new word processor called Writely. It's an elegantly-presented and capable word processor but its underpinnings are what makes it of real interest.
​
Writely's menu bar doesn't reveal too much - it's full of the kind of functionality that you would expect to see in a modern word processor:

However if I now show the entire Writely window, its secret is revealed: 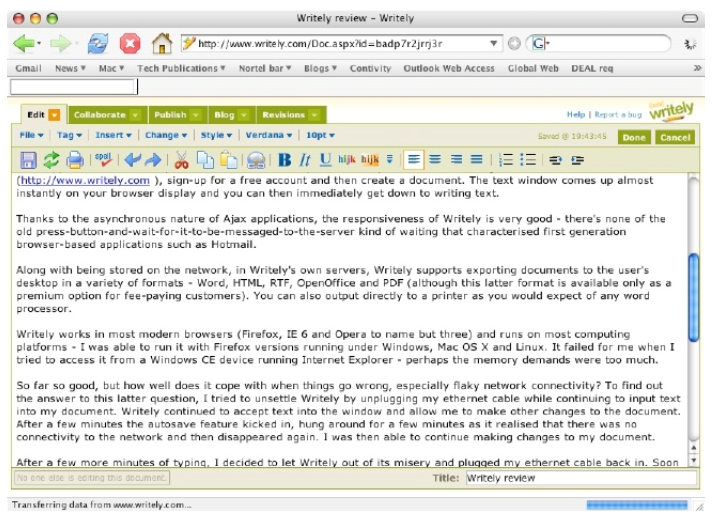 ... Writely is actually running from inside a browser window!

In fact Writely is an AJAX web application. I wrote about AJAX applications in August of last year in the old wiki but for the benefit of new readers, AJAX programmes are browser-based Javascript applications that separate the user interface front-end of an app from the back-end functionality that interfaces with the network.

Good examples of AJAX applications up to now have been the Outlook Web Access (OWA) tool from Microsoft and Google Maps. The latter's ability to instantly scroll a map at the user's command is one of the best examples of how much more responsive an AJAX app is compared with first generation web applications.

What makes AJAX apps of great interest is the fact that there is no software to manually download and install on a user's PC - everything can be loaded on-demand. Writely is a great example of this. To get started, all you have to do is to go to the web site (www.writely.com), sign-up for a free account and then click on the "create document" button. The text window comes up almost instantly in your browser display and you can then immediately get down to writing text.

Thanks to the asynchronous nature of Ajax applications, the responsiveness of Writely is very good - there's none of the old press-button-and-wait-for-it-to-be-messaged-to-the-server kind of waiting that characterised first generation browser-based applications such as Hotmail.

Along with documents being stored on the network, in Writely's own servers, Writely supports exporting documents to the user's desktop in a variety of formats - Word, HTML, RTF, OpenOffice and PDF (although this latter format will only be available as a fee-paying option when Writely moves out of beta). You can also output directly to a printer as you would expect of any word processor.

Writely works on the common browsers (IE6, Firefox and Mozilla to name but three) and runs on most computing platforms - I was able to run it on the Windows, Mac OS X and Linux versions of Firefox. It failed for me when I tried to use it from a Windows CE device running Internet Explorer - perhaps the memory demands were too much.

So far so good, but how well does it cope with when things go wrong, especially flaky network connectivity? To find out the answer to this latter question, I tried to unsettle Writely by unplugging my ethernet cable while continuing to input text into my document. Writely continued to accept text into the window and allow me to make other changes to the document. After a few minutes the autosave feature kicked in, hung around for a few minutes as it realised that there was no connectivity to the network and then disappeared again. I was then able to continue making changes to my document.

After a few more minutes of typing, I decided to let Writely out of its misery and plugged my ethernet cable back in. Soon after the autosave feature triggered itself again and silently saved all the stuff I had written whilst disconnected. Most impressive! Whilst connected, the timestamp of the last save operation is displayed in the top right hand corner of the window. When it loses the connection, the timestamp disappears, given the user some visual indicator that the application has not been able to save the most recent document changes to the network.

Everything I tried to unsettle Writely failed to disrupt it, or cause any of my work to be lost. My ultimate test was to disconnect connectivity at work, make some further changes to the document, head home (where it was able to re-establish contact to its home server via my personal wifi network), work some more and then go back to the office, all without quitting the document window once. Not one character of input was lost despite my nomadic network habits.

Now this is not to say that Writely is fully operational when disconnected from the internet. Many of the menu options do require network connectivity. Included among these, most unfortunately, is the option to save a local copy of the document - just when you need it most! It would be nice if Writely had some form of built-in save feature that allowed a local copy of a document to be saved in some kind of format. Working offline therefore requires you to hope that your laptop's battery doesn't die before you have a chance to resume network connections.

In addition to the standard word processor functions, Writely offers various collaboration features. Documents can be shared by multiple users and jointly updated - each user sees the other person's changes in more or less real-time. Try doing that in Microsoft Word without the aid of additional software!

Writely is the first browser-based application that I think is good enough for serious use, and in place of a traditional desktop program. The biggest compliment I can pay it is that within five minutes of use, I had really forgotten that I wasn't using a stand-alone application.

As you might expect from a free service, there are some limitations on document sizes - individual documents can be no larger than five hundred kilobytes and no embedded image can be no more than two megabytes. However these maximums are likely to be increased when the product comes out of its beta testing phase.

Writely suggests a future where users might have very little of their software residing permanently on their PCs, instead downloading the software just-in-time whenever they needed to make use of it. There would be no need for users to worry about whether they were using the latest version of a software app. As all data is stored in the network, AJAX applications are great for users who only have access to shared computers - the kind of machines found in libraries, schools and other public places.

Up to now I've always used Google Maps to demonstrate the power of AJAX to those new to the concept. However with Writely's overall brilliance and incredible ease-of-use, I'll be using it for my demos in future!
A few days later I had some follow-up thoughts on the app, mostly cautions about the implications of Writely storing my data. Looking back on my words now, I was probably rather too harsh on the application here. Writely did allow documents to be exported in several formats so there was never the risk of "data lock-in" that occurred with some other Web 2.0 applications/services of this era.

Having pondered Writely over the weekend, it is clear that the latest line of AJAX applications such as Writely are able to offer many of the capabilities that previously could only be offered in a stand-alone desktop application. In particular the user experience is much improved, with the individual not having to wait whilst every key click is passed back to the server.

There are still areas that need improvement however. Better off-line functionality is needed if the applications are to be of use in more real-world situations. At the very least, some ability to save a copy of the user's data locally whilst operating offline would be useful! At the moment, whilst Writely offers a local save option, it is only available during online operation.

It would also be useful if Writely could find some way of being able to start up the tool whilst offline, via some form of cached copy.

Neither of these two enhancements would be easy to implement. Each of them probably requiring additions to the Javascript environment that would need to be carefully inspected to ensure that they did not introduce new security weaknesses.

The most fundamental limitation however to Writely and other similar AJAX applications concerns its network data storage. As a user, am I willing to trust a company that it will keep my data secure and backed-up? Can I be certain that no one else will be able to get at my data? And what if the company shuts down tomorrow - does it take my data with it?

This brings us back to the concept of digital banking - a theme that I wrote about last last year. Chief among the credentials that such a digital bank would need to possess is trustability - trust that my data is secure, always accessible and fully backed-up.

Would I trust a start-up such as Writely like this? Probably not - which means that no matter how slick and well-designed the implementation is (and make no mistake, it is very slick and very well written), I will probably never be able to use it for anything more than as a technology demonstration.
I wasn't the only person to be impressed by the application. Google purchased the company, Upstartle, less than a week after I had published my review and Writely was soon relaunched as "Google Docs".

To this day I'm surprised that Microsoft did not purchase Upstartle. It would have been an easy acquisition to integrate (Writely was implemented on a Windows ASP.NET technology stack) and would have slowed Google's efforts to take business away from Microsoft Office.

The rumours are true. Google confirmed late yesterday evening that they have agreed to purchase Writely (you can read about the announcement on Writely's blog). The terms of the deal have not been disclosed but all four Writely employees are moving over to work for Google.

The deal looks like a win for both parties. Writely no longer has to worry about the effort (and expense) of creating its own highly-scaled and backed-up data centre. Google know how to do this like few other companies on this planet.

Google gets a hugely useful software application that can be used either stand- alone, or as part of a wider "Google Office" online suite. Furthermore, I bet it won't be long before GMail's email editor incorporates aspects of Writely.

For the time-being Writely has suspended new user registrations whilst the migration to the Google servers takes place. Existing users can continue to use the application without restriction.

Writely's purchase is not unexpected - it was never clear to me just what their business plan was for generating profit (just charging for the creation of PDF versions of documents was never going to bring in that much money - particularly when a growing number of computer users have this capability built right into their operating system!)

This acquisition certainly shows that Google is serious about pursuing the "online office" concept. If Microsoft wasn't worried about a threat to Office before, it definitely should be now ...
Copyright © 2022 William Hern
Privacy Policy